A few nights ago, while searching for shooting stars in the clear Haitian sky, I was talking with a friend about sharing our stories and how different they would be if told on the same day each year. For example, me sharing what’s going on in my life with you today looks drastically different than if we were to have chatted together on January 1st of 2017, 2016, 2015, etc. This statement got me thinking about just how much change each year brings, especially all that came on the dates ending with the year 2017. So many truly bittersweet ‘lasts’ followed by major life changes and an abundance of foreign ‘firsts’. A first I was pretty happy about...fresh lobster on the beach in Grand Goâve!

While the new year is a time of reflection of the year(s) past and dreaming for the year(s) to come for all, in Haiti there is an entirely new layer of anticipation and excitement around January 1st. It is the day the former (and future, if you ask me) Pearl of the Caribbean gained her independence from France in 1804, the beginning of the good and the bad that would become of the first and only successful slave revolution in the world to date. It is a day of celebration and traditional soup joumou (pumpkin/squash soup)! For us all, it is a day of remembering and honoring what was and looking forward towards what is to come. Another photo of food at the beach in Grand Goâve, but this time I’m eating my favorite food (avocado) and reminiscing all the times I’ve been gifted avocados in 2017

In honor of the roller coaster that was 2017, here is a listen into the soundtrack that played along the beginning of my post-grad ride (as Spotify so kindly reminded me):

Both in my senior year and in Haiti, I’ve taken quite a few “L’s” in 2017. And as Big Sean so kindly reminds us, “if you a real one, then you know how to bounce back…  (Bounce Back).” Here’s to praying that I’m a ‘real one’ in 2018 and that I can learn to ‘bounce back’ faster and stronger from the  inevitable “L’s” in the new year. This past year I also learned that “I got loyalty got royalty inside my DNA (Kendrick Lamar, DNA.).” Enjoying old and new relationships, playing my senior season of softball with a team and coach I would go to war for, living in Haiti, and working with Disciples’ Village has taken my sense of loyalty to those I love, work for and with to a whole new level. In the words of Johnnyswim, “love at any cost is a bargain, it’s quite the bargain (Summertime Romance).” Learning to better love and be loved in the past year has shown me what a true and priceless gift relationships and fellowship truly are, especially that found in family (my mother refers to herself as ‘Queen Mum’, hence the royalty inside my DNA) both in the United States and now in Haiti.

In 2017, especially in transitioning from my known arenas of athletics and academia and beginning my economic development and microfinance work in Haiti, I have become well acquainted with the many unknowns that come with new life stages and working in developing countries. As Switchfoot quite accurately says, “My lungs and I were born to fight, sometimes I’m not sure what I’m fighting for, but death ain’t the only end in sight, cause this ain’t a battle it’s a lifelong war (Hope is an Anthem).” But as the song continues, “My heartbeat, my oxygen, my banner, my home, my freedom, my song, Your hope is the anthem of my soul.” Through the unknowns and uncertainty in traversing new waters and new fields (both academic disciplines and the kind you grow crops in), I have found my anthem and source of hope. I have learned that “maybe I don’t know, but maybe that’s okay” if my next step is to seek the answers and act upon them (Jon Bellion, Maybe IDK), because “…I guess if I knew tomorrow, I guess I wouldn’t need faith, I guess if I never fell, I guess I wouldn’t need grace, I guess if I knew his plans, I guess He wouldn’t be God.” For, “without wonder, how could life ever be wonderful (Switchfoot, Begin Forever).” Grace is the anthem of my days in Haiti, prompting me to respond with, “I wanna sing with all my heart a lifelong song, even if some notes come out right and some come out wrong (Switchfoot, Live it Well).” And trust me, especially in learning Haitian Creole, I’ve had some notes come out right with many more coming out wrong. But “I got one life and one love, I got one voice, but maybe that’s enough, cause with one heartbeat and two hands to give, I got one shot and one life to live.” Grace allows me to keep pushing, keep dreaming, keep finding ways that don’t work, and keep working towards what could be. Love and grace provide what is needed to keep giving, keep speaking, and “Keep On Keeping On (Colony House).”

Looking forward to what is ahead for me in Haiti with microfinance and economic development, “As I walk this great unknown, questions come and questions go. Was there purpose for the pain? Did I cry these tears in vain? I don’t want to live in fear, I want to trust that You are near, trust your grace can be seen, in both triumph and tragedy.” And, “I have this hope, in the depth of my soul, in the flood or the fire, You’re with me and You won’t let go (Tenth Avenue North, I Have This Hope).” And as Aha Gazelle so confidently says, “Ima problem and they know it, you can’t stop me from where I’m going… (All Gold Party).” Are you “Ready for It?” (T. Swift). December brought with it many joys and much hope for what is to become of my continued time in Haiti. I’m learning to create and operate my own systems from which to work and one day succeed from. My heart overflows with love and gratitude for the country and people I get to work with and for each day. Dreams and vision for the future of Haiti fill my heart and mind and help shape my steps for today. Here are some of the happenings of December: Vendors at the beach...micro enterprise in action! Times of Growth and Thought-inducing Lessons 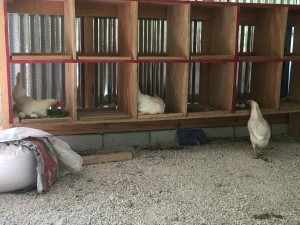 Relocating the eggs was a traumatic event for all Views from the chicken farm Inquiring minds want to know...a layer checking out Jerry’s work as he helps me make improvements to the coop

In 2018 I’m deciding to be bold and unrelenting in the pursuit of what sets my soul on fire. I’m resolving to take care of myself, but by the grace of God not live for myself (Mike Donehey). I desire to simplify my life (it’s absolutely incredible how much junk I have drug with me to Haiti and collected along the way), and to spend time cultivating things that will advance my work in Haiti both now and in the future, and my life and the lives of those around me. May my story on January 1st of 2019 tell of these things, si Dye vle.