Welcome to the first “Fresh from the Bakery” post. I’ll be using these posts to show off a few of my favorite German baked goods. Not only does it give you a chance to drool, but it gives me an excuse to buy fresh baked goods every week! For me, it was easy to decide which thing to talk about first. Behold, the Laugenbrezel and Laugenstange! And since the German language allows you to smash words together to create new ones, that gives us “Laugen-stange” and “Laugen-Brezel.

It should be noted that there are countless names for pretzels, sometimes within the same city! In Bavaria it might be called a “Brezen,” in other places simply “Bretzel” (without Langen-), and there are countless other varieties. I usually communicate by trying as many varieties of the word while jumping up and down excitedly and pointing. Did I mention I love pretzels?

Generally, the standard Bretzel is served with salt sprinkled on top. Much to my chagrin, I found that it is not typical to eat a Bretzel with mustard, although at home I do WHATEVER I WANT! That said, don’t expect any mustard to be provided when you order one. One variation that does exist is the Butterbrezel. It’s not very complicated, and I bet you can even guess which milk product gets added. That’s right, Butter! 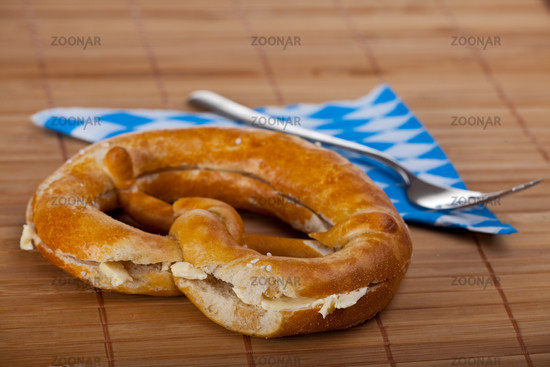 Typically sliced like a sandwich, the Butterbrezel is just a normal pretzel with butter smeared in between the two halves. At first I turned my nose up at this as kind of gross sounding (just room-temperature butter on a pretzel? No thanks), but as soon as I tried it I became a believer. It’s a great, tasty, cheap snack. Some Butterbrezeln even have seasonings or spices added like Schnittlauch (chives), but I prefer the standard pretzel, butter, and salt version.

As for the Laugenstange, I’ve seen it served with salt or sesame seeds, but never butter. No reason why you can’t put some on there yourself!

Just like any other food you can buy, some stores make it better than others. My personal preference is when the outside of the Brezel is firm and almost crunchy; the outside should be somewhere between snack-pretzels in the US and the outside of bagels. The inside should be fluffy and a little chewy, though not too much. As I said, they’re usually served with salt and sometimes with butter, but I’ve also eaten them with cream cheese or Frischkäse (literally “fresh cheese,” but sort of like a lighter, fluffier cream cheese). The Laugenstange actually tends to have a better overall texture and consistancy, since its shape is more simple and it bakes more evenly. They make a great compliment to breakfast, or they can be a good mid-day snack, if you’re not viciously watching carbs. If you are... I can’t really recommend German food to you in general 😀

The Laugenbrezel and the Laugenstange are both delicious, cheap, and widely-available in Germany. If you’re looking for something to fill you up that tastes good, you can’t go wrong with one of these.