Today I really got an amazing cultural experience!!!

I went to not only a football (soccer) game in Tanzania but also my first one ever!

It was absolutely unbelievable! We took a bus and said we were with the U.K. embassy. This football game was so popular because of the teams playing so we had to tell a little lie to be able to be let in. We of course already prepaid for our tickets and everything. The President and Parliament were even there. Everyone in Tanzania LOVES football! The game was being broadcasted in Kenya, Uganda, everywhere! When you’re in Africa you literally feel like a celebrity simply because you’re white. We had a big bus take us to the game because everyone in the house went and three of the staff members so 23 total. When you have 20 mzungu’s (white, foreign people) people S T A R E.

When we walked into the stadium trying to get to our seats everyone stood up and started cheering for us. It was the funniest thing! Everyone was shouting at us cheering us on and taking pictures. I can’t even tell you the number of pictures that are of me on strangers phones. People would come up to you and put their arm around you and just take a photo. However, we ended up having to change our seats. The football games get extremely heated and especially these two teams because they are big rivalry teams. The crowd is literally splint amongst Simba fans and Yanga fans. For our safety we had to move because Yanga fans have the reputation to get a little bit rowdy. I was SO happy we did because I was wanting to root for Simba! Last year Yanga beat Simba so I always like to go for the underdog. Before the game it was really cool because people would come by with Polaroid cameras and take a photo of you. If you liked the photo you could buy it. 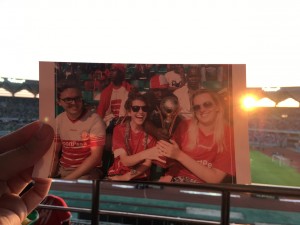 Random people would even come up to you to take a photo with you and buy it simply because we were white. There was a little boy (probably 9 years old) sitting beside Alex and I and he was at the game all by himself. The stadium was absolutely huge! It reminded me of a UT football game! I was amazed that this little fella was so brave to come to the game by himself!

The game was absolutely unbelievable!!! Both teams were playing so good and no one was scoring any points because of how good both teams offense and defense were. The game ended up going into overtime and then that tied so then it pretty much went into sudden death. I was so captivated and into the game! It was unbelievable! Luckily I was surrounded by my England friends so they were able to answer any questions I had about the football game!

They had these red explosives that were shooting off in the stands and everyone was going wild. However, Faraja (one of the men from Work the World) became very serious and told us to put our phones away. Supposedly people can get very out of control at football games and Faraja didn’t want any of us to get hurt or get anything stolen. As I looked down at the field I could see ambulance after ambulance and so many police officers. People from the other team were beating on Simba fans because of the win. Supposedly on game day if you walk near one of the sports clubs in the other teams colors you will get beaten and can even die. We got escorted out by police officers and made it safely on our bus. It was so cool seeing all the Simba fans prancing around fully hyped. One lady kept twerking on the hood of every car since we were in dead stop, bumper to bumper traffic. It took forever to get home but it was a bomba bomba game and one that I’ll always remember!