It’s hard to think that last week at this time I was enjoying a lazy Sunday afternoon with my family. Fortunately, though I’ve only been in Port Elizabeth for two days, it already feels like home. It was hard for me to picture what my experience here would be like. It’s one thing to dream about things and another for them to become reality. I had no idea where I would be staying, who I would be working with, the culture around me, or how successful I would be in making an impact on this community. Those uncertainties have since been filled with a sense of gratitude, confidence, and excitement for the months to come. 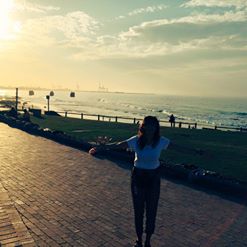 I arrived on Saturday afternoon with four other new volunteers (we have dubbed ourselves “The New Kids on the Block”). After a short introduction to our hosts, we were taken to the United Through Sport House in Newton Park, Port Elizabeth. The UTS house is both an office and volunteer accommodation, and has a homey, summer-camp vibe that immediately made me feel welcome. There were about twenty other volunteers there, some who had been here for a few months already. They hailed from so many different countries—Germany, Switzerland, Scotland, and the U.K (out of the group, only four of us were American!). I am really excited that I have the opportunity to not only learn about South African culture, but work alongside others from all around the world. After settling into our rooms, we enjoyed a traditional braii, or South African barbecue, complete with lamb, chicken, and sausages.

The past two days we have spent getting ourselves oriented with each other, United Through Sport, South African culture, and the Port Elizabeth community. United Through Sport was started in South Africa ten years ago with the goal of empowering communities through holistically developing children through both sports coaching and academic mentoring. Each year, over 200 volunteers partner with United Through Sport and reach over 18,000 children. Traditionally, children who are part of UTS come from impoverished communities, with only about 3% ever having the opportunity to obtain a higher education. Through UTS, these children have the opportunity to learn different sports (which are not taught in SA schools) and life skills that go along with them, such as teamwork, leadership, and respect. In addition, they are also paired with academic mentors who help them feel more confident in the classroom.

Through this Mass Participation Programme, children can then further be selected to go through the Junior and Senior School of Excellence, which enable them to attend better quality schools, increasing their potential to go to university by over 80 percent. This could mean everything for a child who has never thought that they would have an opportunity to become more than their surroundings. UTS has partnered with many different schools in the Port Elizabeth community and in just a decade has impacted the lives of so many volunteers, children, and their families. I could not be more excited to help this organization move one more step forward in their mission.

After orientation on Monday, we had the opportunity to stop at Summerstrand, the market alongside the beach. I ended up picking up a few souvenirs (already!) and having a chance to chat with the locals. Port Elizabeth is known as “The Friendly City” and it is well deserving of that name. I found myself laughing and joking with people I had only just met. Today’s orientation was focused more on developing life skills and coaching ability. I had no idea that the organization that I was volunteering with was so centered on sport, but I can already see the value in it and the opportunities I will have to grow personally. For example, today we had to come up with a coaching lesson plan, and we were able to incorporate different learning opportunities through the different interactions. As someone who has never considered myself athletic, I was a little apprehensive at first, but drew on my experiences of playing soccer at school and remembering when I was a little kid in order to come up with some fun exercises. I will be coaching soccer each Monday and Friday, and I am really excited to grow in that aspect. The middle of the week will be devoted to teaching at various schools, followed by mentorship/life skills/tutoring at the Junior and Senior Schools of Excellence. We also had the opportunity to tour the townships today (the small communities around Port Elizabeth in which we will be working). To say that it was eye-opening would probably be an understatement. I think that people have so many different ideas of what poverty looks like, especially in Africa. The most surprising thing to me is that poverty was in pockets all over a relatively well-developed city. This reinforced the lesson that I am learning: sometimes an opportunity to help is a lot closer than you think. Whether I’m in South Africa, Nashville, or Wisconsin, there are people who are hurting everywhere. But where people are hurting, there is an opportunity to help. An opportunity to give somebody the chance to take control of their lives. An opportunity to be the change we wish to see in the world.

Tomorrow is our first day on the field...literally. I could not be more excited to get to work. The fear and worry that I initially had has been replaced with joy and confidence.

Thank you for your prayers and love. I am excited to share them tomorrow and the rest of this trip.

Wow. Who knew that in just a 10 hour layover, I could have such an incredible day? Yesterday I left Chicago and arrived in London (2 AM my time, 8 AM theirs). My flight for Johannesburg didn’t leave until 7 that night, so what better to do than a little exploring?

I have to admit, I was quite apprehensive about the entire process. For months, I have been planning and dreaming about this trip, and today was the first day that dream became a reality. I was scared of traveling on my own, of the plane flight, of missing my connecting flight...basically, I was scared of everything. When I was sleepless on the plane, worrying about all of this, I ended up reading David’s story in 2 Samuel. Even though he faced a variety of unknowns and perils, God’s presence was always with him.

God’s presence was all around me in London. I could not have had a better day in a city that I have always wanted to visit. I ended up meeting some of the friendliest people at the airport who helped set me on my way, enjoyed a lovely coffee and croissant on my way to the Underground, and enjoyed a ride into the city. I stopped for an hour at Kensington Gardens and watched swans and ducks float lazily on the Round Pond, all with a beautifully sunny sky (which is a London rarity). Maybe it was jet lag or sheer excitement, but everything felt like it was straight out of a dream. I had no problems at all navigating around London (another fear of mine that was quickly put to rest). I think my favorite part of just wandering around was the fact that it’s such an interesting blend of historic landmarks and cosmopolitan charm. At around noon, I had the chance to meet up with Waleed, a mutual friend of Danielle (my best friend who studied abroad in London last year). Not only was he the most gracious and kind host, we managed to fit a whirlwind tour of London in just a few hours, including St. Paul Cathedral, Buckingham Palace and Big Ben. We ended with a delicious lunch at a pub near St. James. I’m in the airport about to leave for Johannesburg, and still marveling at all that’s happened today. It doesn’t seem real. But if today is any indication of the next two and a half months, I know it’s going to be more than I could ever dreamed of.

“It is better to light a candle than to curse the darkness.” —Eleanor Roosevelt My name is Jeanette Morelan, and in just nine days, I will be leaving my home in Wisconsin and traveling to Port Elizabeth, South Africa. As I sit here and write these words, even now, I still don’t believe it. It seems like it was only yesterday that I was sitting in a classroom with my Social Entrepreneurship advisor and hearing about the Lumos Award, a way for students to bring their light to places all around the world while at the same time illuminating things within themselves through their once-in-a-lifetime experiences. I was skeptical that I would ever be accepted to the program, but on that day in November, a spark was lit.

It’s amazing what a little bit of faith can do.

My dream of learning more about community development and myself through an experience abroad was made reality thanks to my Lumos Award. And now, with flights booked, bags not-quite packed, and an adventure ahead, my heart is filled with nothing but gratefulness.

During my time in Port Elizabeth, I will be working with United Through Sport, a partner of Frontier, my original travel organization. Not only will I be assisting in providing disadvantaged communities with support and assistance, from education to physical resources, I will also be learning first-hand about the importance of empowerment as a solution to social issues. As an aspiring social entrepreneur, my life’s passion is to help address social issues by empowering individuals both economically and spiritually.

In a world that is rocked by seemingly insurmountable economic, political, and social issues, it can be easy to simply want to curse the darkness: to give up, avert our gaze, and simply turn the other way.

But I believe there’s another way. Be the light.

Through the experiences I’ve had at Belmont and now with the physical support of the Lumos Award, I am hoping to not only shine a light in the darkness, but to help spark a movement—first, within myself, then, to all those who are impacted and will hear about my experience, and then...who knows? I’m ready to find out.

Stay tuned with more pre-travel updates and follow my experience on social media with the hashtag #JensLumosJourney.