The Great White Mountain. Kilima Njaro. Ol’doinyo’oibor. The Roof of Africa. No mountain captures the imagination quite like Africa’s tallest, the biggest and baddest of literally hundreds of volcanic peaks and craters and mounds that speckle East Africa. More accurately, it defies the imagination, as it is an oft-told story that when alerted to the presence of snow-capped mountains along the African equator, the armchair explorers of the Royal Geographic Society scoffed and sent their own adventurer to dismiss these preposterous claims. He even wore a special white helmet to protect him from the brain-addling equatorial sun. To their chagrin, however, there it was: an ancient glacial monstrosity filling the skyline behind the giraffes and elephants on the plains. Looking out over the Shira Plateau.

Almost 200 years later, the mountain now known as Kilimanjaro is one of the most popular treks in the world. Whereas when German missionary Hans Meyer first climbed in it 1889 by use of ice axes and glacier traverses, any moderately tenacious hiker can now achieve the summit, Uhuru Peak, by little more than a long, rocky walk. You can’t go alone, of course. The massive appeal of the top of the African continent has been duly harnessed by an entrepreneurial Tanzanian government, and it is has been strictly regulated. To enter Kilimanjaro National Park, you must be with a registered Tanzanian tour company and led by a Tanzanian guide.

I attempted to join the ranks of hundreds of thousands before me with a guide named Hussein Said, but my goal was more than the summit: I wanted to see how the park worked, how the machine was oiled, and what made up the culture of the thousands of guides and porters that facilitated this enormous industry. 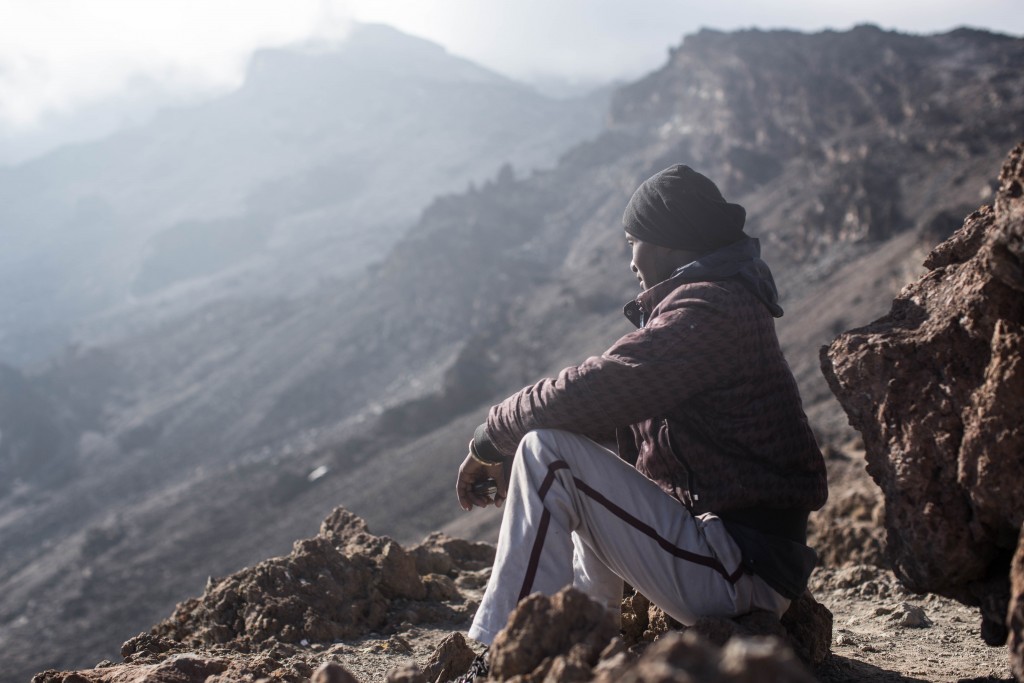 One of my porters, Leonard, above the barren moonscape that is the African alpine zone.

First, let me explain that any journalistic attempt to examine the inner workings and working conditions of the park is regarded with immense suspicion. A forthcoming post will elaborate my personal experience working with TANAPA and KINAPA (the national and park-specific authorities), but suffice to say that I was limited to speaking with transparent guides, porters, and tour operators who were willing to be honest about the pros and cons of working in such a thickly bureaucratic tourism economy.

When the fog rolls in and obscures the almost 200 tents that I counted at Baranco campsite on the southwest slopes of Kilimanjaro, you get a taste of just how wild this mountain can be. The cozy mess tents with ever-ready popcorn and hot cocoa are hidden in the mist, the hundreds of porters vanish, and it’s suddenly you, lost, alone, in an impenetrable maze of ridges, valleys, cliffs, gullys, decorated by phantasmagoric foliage appearing like ghostly statues on every side–the giant senecios and 20-foot lobelias become frightening ghouls haunting the mountain with bizarre, protuberant heads. The ‘everlasting flowers’ with translucent white petals emerge ghostly and ubiquitous. Beads of moisture drip down your coat, a portent that at any moment you are at the mercy of an equatorial blizzard or an alpine monsoon. A paludal landscape sucks your boots into bog, often coated by a layer of ice. The bizarre but mesmerizing Lobelia.

Even if this cloak of fog lifts, you’ll find yourself staring out over a horizon held up by an endless white blanket. You are above the clouds, too, phenomenally isolated, a spectral island in the sky. One feels as though you couldn’t penetrate this meteorological barrier if you tried. You are alone.

And then you stumble back into camp, where hundreds of people from dozens of countries all huddle around their bowls of soup and wish they’d chosen an easier vacation (“Why not Zanzibar??!”). Why anyone in their right mind would choose to trudge miles and miles of barren alpine desert day after day just to snag a photo with a stupid signpost is beyond them. But then again: the tallest mountain in Africa. How much more remote, how much more exotic can it get? A lot, actually, but even after two hundred years of conquest, Kilimanjaro still holds the public’s imagination as the mysterious snowy roof of the mysterious dark continent. And if a company can take you up for just a few thousand dollars? Sign us up!

Actually, at any given time well over a hundred different outfits are rearing to push, pull, or carry you up the mountain, and they succeed in summiting as many as 20,000 people a year. Kilimanjaro mountaineering is a thoroughly commercial affair these days. The excessive regulations from TANAPA, Tanzania’ litigious park bureaucracy, stipulate that anyone entering the park must have, at minimum, one guide, one cook, and three porters. That number increases rapidly as groups get larger, and armies of more than 400 porters are not unheard of. In strange ways, these trips harken back to the ‘golden era’ of African exploration, where a few Europeans would command thousands of African and Arab porters through dense jungle so that they could maintain a few creature comforts–wine, women, and woolen pajamas. Except that, of course, on Kilimanjaro you’re following well-beaten trails all the way to the summit. A guide and client on the roof of Africa.

The benefit of this tourism machine, of course, is that almost anyone that can walk can eventually get up 19,341 feet to the top if their support staff is large enough.

The government of Tanzania seems to regard the mountain as a cash-cow first, a natural wonder second., ensuring that it brings jobs first, enjoyment (and that elusive ‘freedom of the hills’) later. At the park gate, a guide must sign five different books in three different buildings before launching up to the first camp, where upon arrival both he and every guest must present their permits and sign again, a process repeated every day until you leave the park. This sort of overbearing government involvement exists, as far as I know, only on Tanzanian mountains.

The result is that, although many expeditions companies have become fluent in these arbitrary practices, they too are reduced at some level to tourism machines focused on navigating red tape instead of green valleys. A porter takes a breather with a cigarette. Wait, what??

The porters and guides are also required to carry dual (read: redundant) certifications from both TANAPA and an operator’s association that cost around $30 a year, which is more than many of these subsistence workers can afford. Even the clients feel the effect: the campsites are strewn with trash, and cues of tourists quickly clog narrow trails to the summit, obscuring the view of one of the world’s great mountains.

Because it is, regardless of mismanagement, regardless of overcrowding, undoubtedly one of the world’s great mountains–one merely has to escape the madding crowd, walk out of the littered camp or away from the back-logged trails to sink into an immediate, undiluted awe at that sea of clouds extending away to infinity.

You need only turn toward that inimitable barren moonscape that lies between the treeline and the snowline only upon the equator. You need only contemplate traversing the circumference of a mountain this powerful, a mountain whose shoulders seem to descend forever into the heart of darkness that lies under the clouds. Along the rim of the crater, which you breach just as a faint line of pink streaks the horizon, startling standing glaciers appear to your left, just a thick sheet of ice sitting a mere few hundred kilometers from the equator, dripping away before your eyes. Looking down into the expansive Kibo crater below, you might worry that you’ve been suddenly and unwillingly transported to another planet–a barren, red, inhospitable desert–and in many ways, you have.

Turn your back at the right time and in the right direction and you just might think that you, like the mountain itself, are alone. Approaching the summit at dawn.